2022 Mississippi State Baseball Uniforms Recap
In 2022, Mississippi State largely kept its uniform lineup from the 2021 National Championship season intact, with a few minor shakeups. Most notably, the all-black uniform was removed from the lineup, resulting in the first Mississippi State baseball season without a black jersey since 2017. One entirely new jersey design was introduced, an Adidas-designed alternate maroon jersey that was worn only twice. Finally, the classic maroon 85 jerseys were tweaked to feature player names on the back rather than the state of MS outline. The maroon 85 jerseys were paired with white and white pinstripe pants in 2022; they were never worn with gray pants as they were once in 2021. Otherwise, the Bulldogs' classic uniform set remained exactly the same in 2022.

With the shakeups essentially evening out, Mississippi State wore 8 uniform combinations in 2022, which was the same number that was worn in 2021. 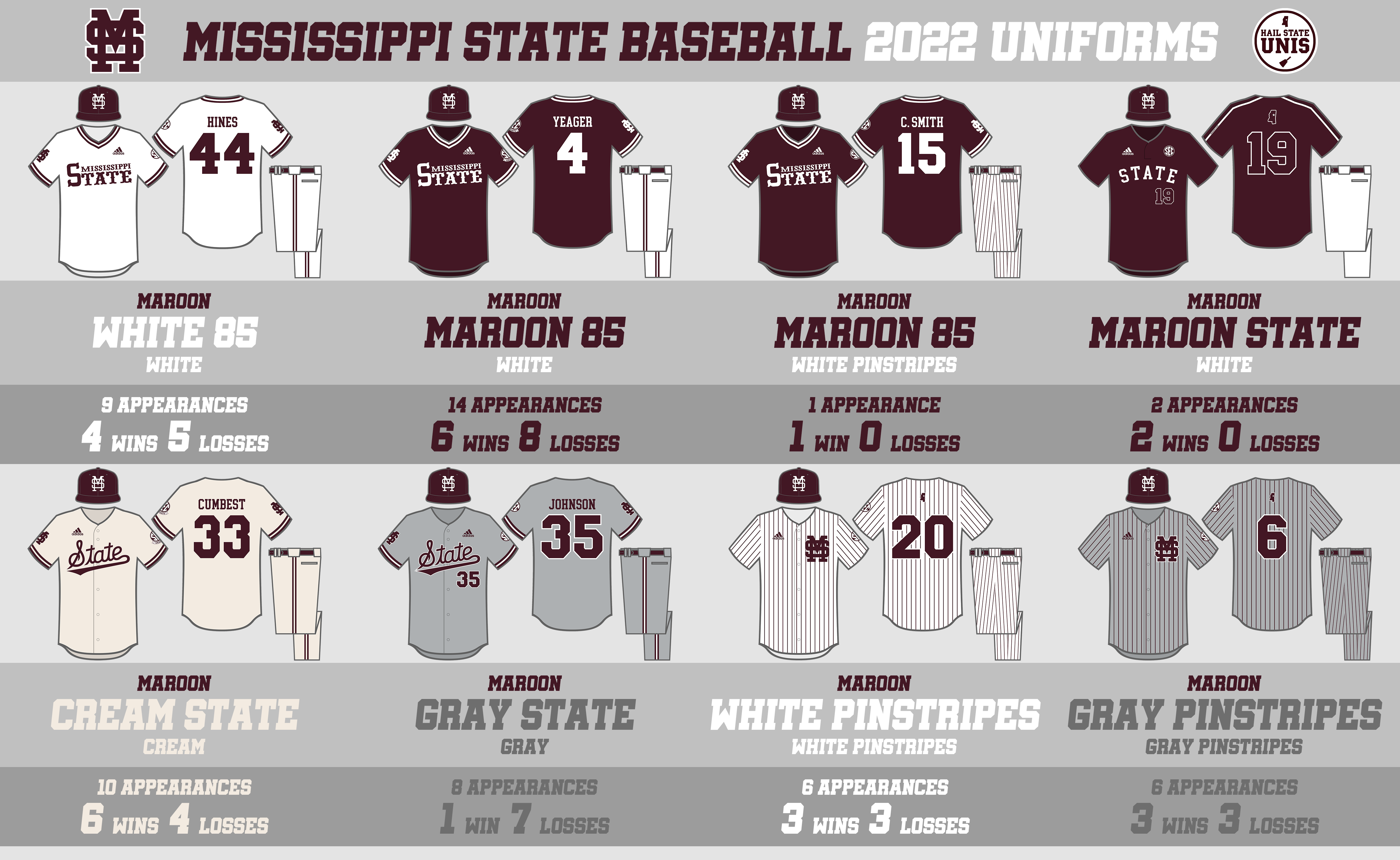 All-Black Uniform Removed
Mississippi State's most polarizing baseball uniform over the past few seasons was the all-black uniform that featured a black hat, black '85-style jersey, and black pants. Nicknamed the "Sunday Blacks" or "Nickelblacks," the look was seemingly equally loved and hated, with no in-between. In particular, the use of black pants in a sport that traditional features only light-colored pants was very controversial.

What made the look so popular was the success that the Bulldogs had in it. From 2018 to 2021, Mississippi State had an impressive 24-7 record in the all-black look, including a pristine 10-0 record in 2019. However, they began to see less success in 2021; after getting out to a 4-0 in non-conference play, the Bulldogs lost in all-black in back-to-back Sunday games to start SEC play. Following that stretch, the look was put in the closet for the rest of the regular season. It was brought back for Game 2 of the Super Regional against Notre Dame, which was on a Sunday and was an opportunity for Mississippi State to win a Super Regional while wearing all-black for the third consecutive postseason. That game did not go as planned, with the Irish winning 9-1 to force a game 3.

That loss would prove to be the nail in the coffin for the all-black look, as the Bulldogs proceeded to win game 3 over Notre Dame and advance to the College World Series, which they would win to capture the first National Championship in school history, all in more traditional uniforms.

For the 2022 season, the all-black look was ditched completely. It marked the first season since 2017 that the Bulldogs had not worn a black jersey or hat. Black jerseys were first worn by Mississippi State baseball in John Cohen's first season as head coach in 2009; since then, 2017 and 2022 are the only two seasons in which they have not been worn. It will be interesting to see if, after the lack of success that the Bulldogs had in 2022, black jerseys will return in some capacity in 2023.
Player Names Added to Classic Maroon 85s
Mississippi State joined the surprisingly long list of teams who tweak or change uniforms immediately after winning a championship in them when they tweaked the classic maroon 85 jerseys for the 2022 season. The changed mirrored the ones made the white 85s in 2021: the number font was leaked to feature the full version of Mississippi State's custom font rather than the condensed version and player names were added to the back of the jersey, replacing the state of Mississippi outline.

This was not a surprising move, as it brings the maroon 85s in line with the white 85s and cream/gray script jerseys, all of which feature player names. Aside from the Adidas "A2" jerseys that were introduced later in the season, the Bulldogs' only traditional jerseys that currently do not feature player names are the white and gray pinstripe jerseys, which still feature the state of Mississippi outline on the back.

This completes a transition from the 2017 and 2018 seasons, during which none of the Bulldogs' jerseys featured player names. Names were added to the black jerseys in 2019, gray jerseys in 2020, white 85 and cream jerseys in 2021, and maroon 85 jerseys in 2022.
Maroon 85 Jerseys Paired with White Pinstripe Pants
In the second game of a double header with Princeton on March 13th, Mississippi State paired the classic maroon 85 jerseys with white pinstripe pants for the first time since 2020.

The maroon jersey over white pinstripe pants look is one that Mississippi State used to do frequently, but hasn’t seen much action in recent years. The last time it was worn was the Sunday game at Long Beach State in 2020, which itself was the first time that it had been worn since 2018.

New Maroon Adidas "A2" Jerseys Worn Twice
In 2022, as they have done in the past, Adidas created a new templated design for each of its high-profile teams. This year's templated design was meant to show off their new "A2" template, which features a tighter fit with more panels, vent holes, and hidden buttons. It very much seems to be mimicking Nike's recent baseball uniform templates- which is an odd move, considering that Adidas's more traditional baseball uniform templates is one of the few things I thought they actually did better than Nike.

These templated designs all featured every common elements, including a solid color wordmark on the front, inverted numbers on the front and back, and vertical shoulder stripes that feature the team name on the left sleeve. This worked better for some teams than it did others, and certainly wasn't as bad as Adidas's templated designs of the past. But they still, you know, kinda sucked. Mississippi State's relationship with Adidas always seems to be at its best when we have some or all control over the design- this was a (thankfully, increasingly rare) situation were Adidas had complete control.

​Mississippi State's version of the templated design featured a maroon jersey with the 50s-style STATE wordmark that was worn in white jerseys in 2019 and 2020. Numbers on the front and back were maroon outlined in white; the state of Mississippi outline on the back was also maroon outlined in white. They were worn with solid white pants with no stripes, which was the first time that such a pants design had been worn since 2016.

In all, it wasn't the worst look Mississippi State has ever worn. It honestly isn't even in the bottom 5 (or even 10) when you consider all of the crap Adidas has put us in over the years. It's a fine, if not below-average baseball jersey. Would be an excellent BP top. But when compared to the rest of the Bulldogs' iconic uniform lineup, it really sticks out like a sore thumb.

To their credit, Mississippi State wore them as little as possible, presumably just to fulfill contract requirements, and then acted as if they never existed. The uniforms were worn twice, both in midweek wins over SWAC opponents (Grambling and Southern). This was a near-identical fate to the one that the 2018 maroon M over S jerseys (which were designed by Adidas and featured an Adidas logo directly above a noticeably small M over S logo) saw. In both cases, the Bulldogs hid the Adidas design in a couple of midweek games and stuck to their more classic looks for the large majority of the season. Which is really all that you can ask for- I think dealing with a mediocre-at-best design in a couple midweek games every few season is more than worth it when the rest of the uniform set is as great as it is.

Hats
For the first time since 2017, Mississippi State only wore one hat design in 2022: the classic maroon design featuring the thin version of the M over S logo.

Jerseys
Mississippi State wore 7 jersey designs in 2022. Two each with the classic '85, script "State," and M over S logos, and one with the 50s-style block "STATE" wordmark.

Combinations
The Bulldogs wore 8 combinations in the 2022 season; the classic Maroon 85 jerseys were the only jerseys to be worn in more than one combination, as they were paired with both white and white pinstripe pants.

General Thoughts / Looking Forward to 2023
Despite the lack of on-field success in 2022, Mississippi State still has the best classic uniform lineup in College Baseball. With the white and maroon 85s, cream and gray script "State" jerseys, and white and gray "M over S" pinstripe jerseys, the Bulldogs have an incredibly classic, consistent, and balanced uniform lineup that isn't rivaled anywhere in the country. So for the most part, I hope- and expect- that the uniforms will remain largely the same in 2023. That being said, a few notes to touch on:

Another thing I will say is that the idea of a second maroon jersey isn't a bad one- the Bulldogs could certainly use 7th jersey for weeks where they play more than one midweek game. Whether that's a black jersey or a second maroon jersey, State has made it work in the past. From 2011 to 2015, the maroon 85 and maroon "M over S" jerseys were worn interchangeably with no issue. Although I 100% believe that the maroon 85 jerseys should remain the Friday jersey forever, having a second maroon jersey option could definitely work, whether that jersey features the "M over S" logo, a McMahon-era "Bulldogs" script, or something else entirely.

Bring Back Maroon over Gray?
In 2019, Mississippi State consistently wore the maroon 85 jersey with gray pants in game 1 of road series, as is baseball tradition. However, in the years since, they've gone back to nearly exclusively wearing white pants with the maroon 85 jerseys, regardless of whether the game was at home or on the road. The maroon 85 over gray look has been worn once in the last three seasons- the 2021 season opening win over Texas.

This doesn't bother me as much as it used to- but given the choice, I'd still like to see the maroon over gray combination return at some point. Not only does it conform more to baseball tradition, but I just think that maroon over gray is a really good look. It looks great in both football and baseball, and looked especially great in the aforementioned 2021 win over Texas with the M-W-M stripe on the gray pants. Maybe this is something we could see return in 2023.

Bring Back Black?
Especially towards the end of the season, I started to see references to the fact that as soon as the black jerseys were removed from the lineup, Mississippi State had it worst season in 7 years. Obviously, this is just a coincidence and things would have gone the same even with black jerseys in the lineup. Still, baseball is a superstitious sport. It isn't out of the realm of possibility that black jerseys return to serve as a jolt to the team in 2023.

If black jerseys were to return, I'd like to see them be a more special thing- i.e. not worn every single weekend. I'd also like to see them paired with white pants at home and gray pants on the road- the all-black look has run its course, as evidenced by its downfall during the 2021 season. I think a well-designed black alternate jersey that is made with white/gray pants in mind has the potential to be a great addition to the Bulldogs' uniform set. If done right, it could fit in perfectly alongside Mississippi State's other classic looks.
That's it for the 2022 Baseball Uniform Recap! I have no doubt that Mississippi State Baseball will be back stronger than ever in 2023. Until then, Hail State!